Yesterday I drew a line in my Toddler’s sandbox, and he crossed it. 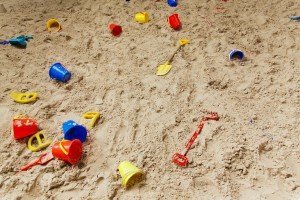 When it comes to the careful art of negotiation, I’m learning–painfully–from my toddler.

He said, “two,” reinforced by his concentrated effort to show me two fingers (which is a two-handed job).

He nods his head.  Good.  I fish out two crackers.

As I turn back to Graham to hand them to him, he holds up five fingers like a stop sign: “Fie.”

“Fie!”  At this point he stops eating his two crackers–as if a demonstration is going to convince me–and digs in.

“Two and a half” I countered.  I have bigger battles to win–like bedtime.  Though I won’t admit it, right now I don’t care if he has 40 crackers, as long as we’re moving toward bedtime.

But I also know where this is going. So I break a cracker in half and hand it to him.  “Two and a half.  That’s it.”

But he’s not budging. Still holding out a firm hand: “Fie.”

I leave the half on the counter and walk away telling him it’s time for bed.  Then he starts to cry.  So I pulled out a trick I’ve found works about 10% of the time (hey, for a parent, that’s like batting a thousand).  I go back to the counter and put the cracker to my mouth and tell him I’m going to eat it.

“MINE!” he whales in return.

I turn around, with cracker in hand, and head toward his bedroom.  He follows me, trying to reach up for the cracker.

This goes on for another minute.  “Okay–you can have it–but it’s bed-time right now, okay?”  He gives me a happy nod and takes the half-cracker.

But, really, I won.  Or, rather, we both did.  That’s negotiation: when everybody wins something.

But life isn’t always that easy.  Especially on the big things.

Scott Adams, in his book (which I wrote about here) says, the insane one in the room is usually in control.  That’s because only someone who’s insane will go to such ridiculous lengths to get what they want.  And typically nobody else wants it that bad.

When we find that thing in life that we want above everything else–whatever it is–that’s what we should be insane about.  That’s the hill we should die on.

My son isn’t insane; he’s just two.  But for him, more crackers were important enough a hill to die on.  And he fought me for them.

In case you’re shaking your head in judgement right now, I already know.  I’m not really advocating the manipulation of small children.  I doubt that’s healthy.  And Kristin has me signed up for a parenting conference in February (true story).

But what I am advocating is the power of being slightly crazy when it comes to negotiating on the important things.  If it’s important, it’s significant.  And if it’s significant, there will always be pushback.  Sometimes, crazy is good.