The Ballad of My Toaster Oven 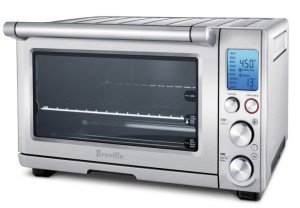 Many moons ago when scientists first invented the toaster oven, it was simple.  Blessedly simple.  It was like a toaster turned on its side.

But now…things are different.  Now these things have switches and buttons and this ridiculously detailed little LED info-screen that could probably drive my car if I knew what buttons to push.

Last month I was at my grandparents house, and I used their toaster oven.  Or, I tried.  Theirs too has lots of lights and switchy things.  For the sake of my poor yet-to-be-toasted bread, I eventually had to phone it in and ask for help.

And if that was all there was to the story, you wouldn’t be reading this.  But it’s not.

Last week, my father-in-law stayed with us. And, sure enough, one morning, he wanted a bagel. A toasted one.

And he was in luck—we have a toaster oven!

But in the course of things, the toaster oven just didn’t get hot like it should have. He pushed buttons—good buttons—but the thing just never fired.

I knew what buttons to push (because I’ve already been through the Black & Decker Toaster training events), so jumped in and pushed away.

After it was over, I thought about this episode. My father-in-law’s a pretty smart guy. He got his PhD in Chemistry from Harvard.  I sometimes forget how to spell chemistry.

(True story: as I was writing that last sentence I looked back and saw a squiggly red line under the word chemistry. Not making this up.)

So shouldn’t the mystery of the modern toaster oven be an automatic win for a guy like this?

No, because the principle here is the same one that guides all forms of success. Success isn’t about having all the right answers, it’s about getting them.

The difference is in how you approach your problem going in.  If you go in already set on the answer, then you’re only going to win a few times.  That’s because you’re only one person with one person’s experience.

But if go into a problem open-minded, willing to hear what others have done, then your success rate goes way up.  The difference is you’re now tapping into the wider world of others’ experiences and expertise.

The moral of the story: there’s usually somebody who already knows how to work your toaster oven.

Next time you get stuck, go find that person.