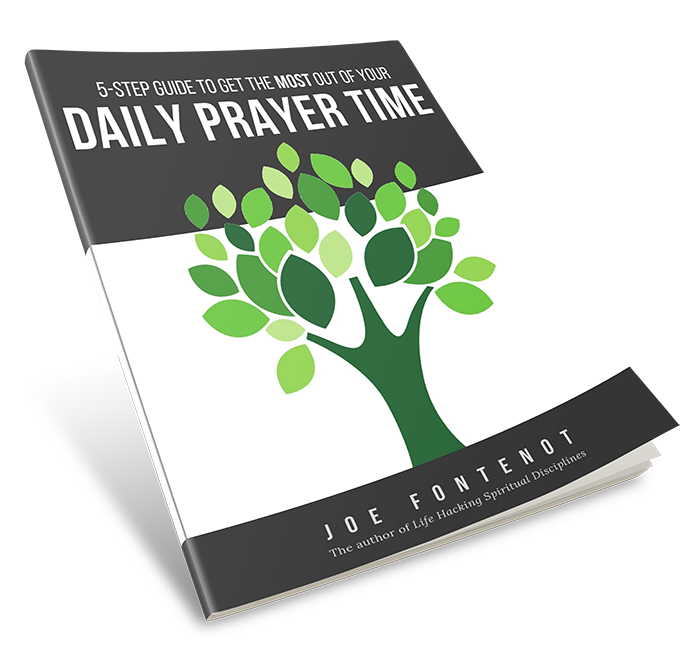 DOWNLOAD this simple guide (no email signup) so that you can build structure into your prayer time and reclaim your focus.

“Reading Joe’s devotionals has contributed to the shape of my thoughts and life.” 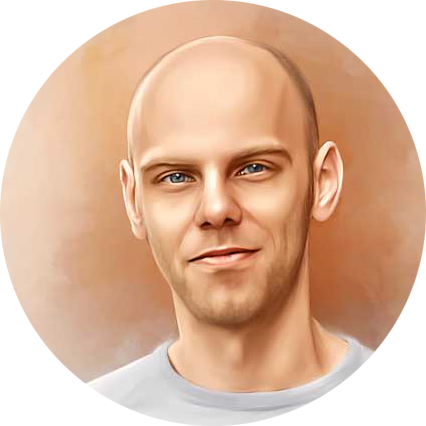 My name is Joe Fontenot, and I write about practical spiritual growth. 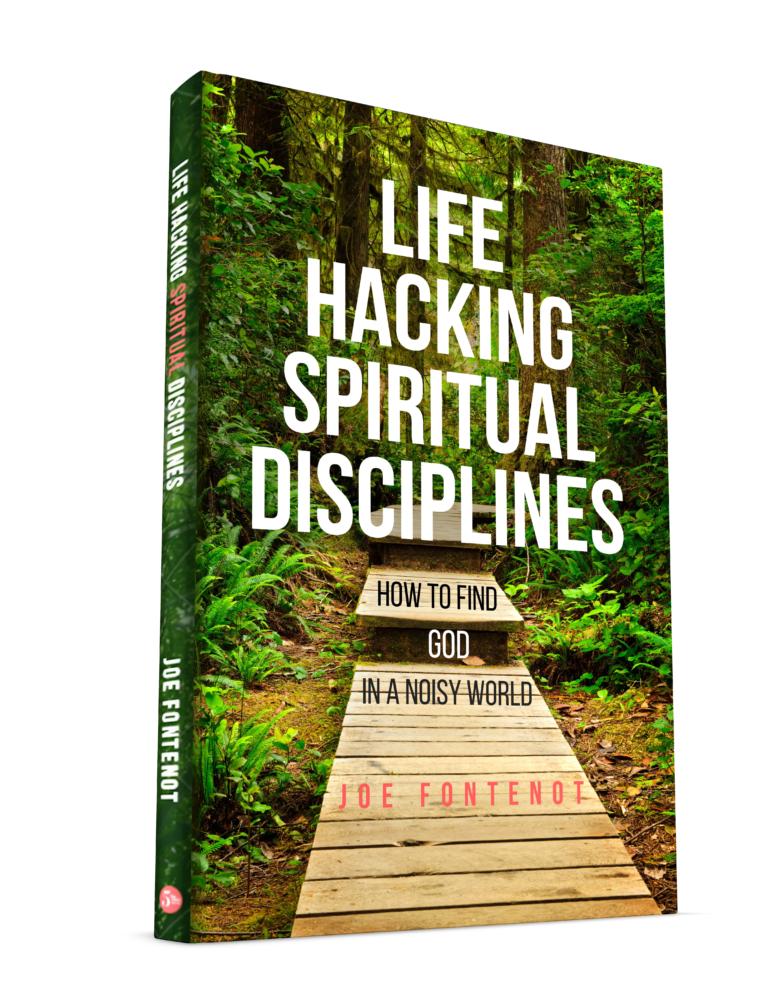 “Joe Fontenot has tackled the issue of spiritual disciplines from a fresh perspective. Easy to read. He does a great job.” 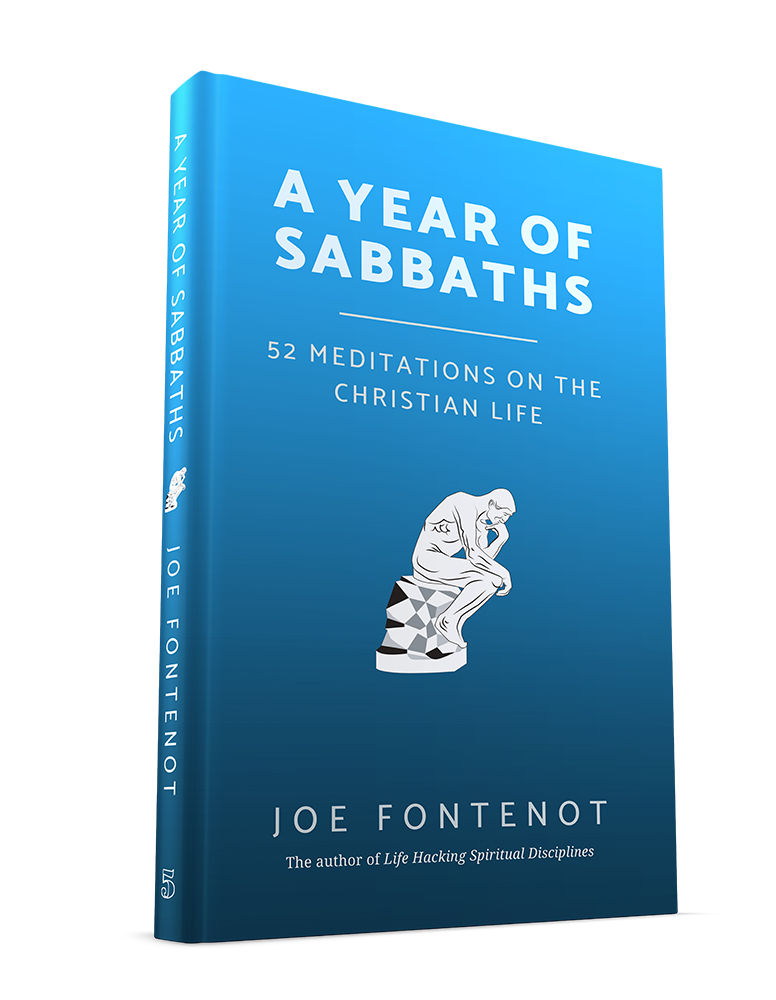 This devotional of 52 meditations on the Christian life will take you through a year of finding a deeper time with God. 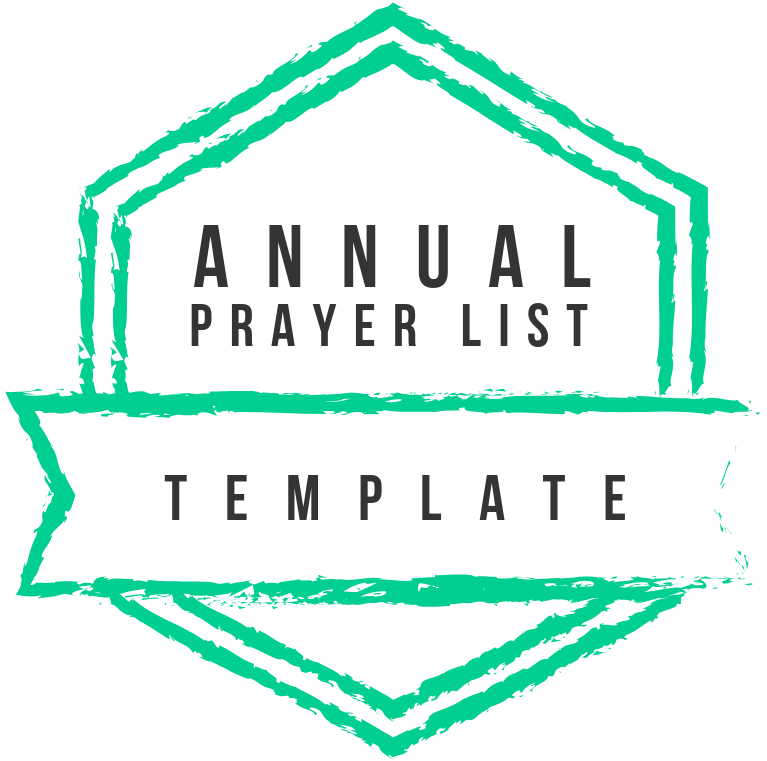 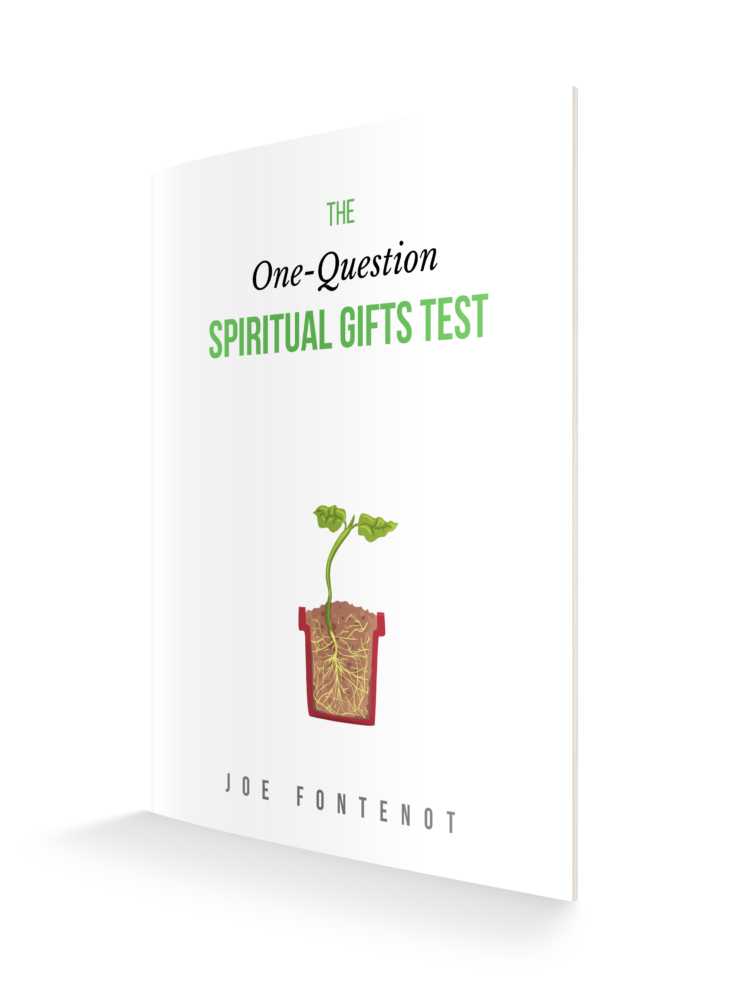 For speaking, writing requests, or other questions:

Psychologists have shown us that willpower is a fairly weak force.

This is why relying on our ability to just ‘push through’ so often fails. It’s not that we don’t want the outcome, it’s that we’re pushing a square peg through a round hole, and there’s only so much we can do.

(This is something I talked about at length in my first book on spiritual disciplines.)

Instead, the solution is to recondition ourselves to automatically do the thing we’re trying to do. To build the right neural pathways.

This, in common language, is called a habit: an action that is both expected and in harmony with the rest of ourselves.

Consider the scene: Jesus’ cross was probably 30 or 40 pounds. Not light, but hardly something too heavy for a grown man to carry.

Yet, they’d beaten him so badly, he couldn’t even do that.

What is so interesting about this is what is still to come. Still, the forgiveness. Still, as Isaiah wrote, he goes silently like a lamb to slaughter. And still, ultimately (and voluntarily), Jesus takes our place.

Putting aside how amazing any of those points are, Jesus was able to do this, not because he muscled through it. His body was moment by moment failing.

No, he was able to do it because he was in harmony with the father. Despite his crushed body, his spirit was as strong as ever. And it moved him forward.

My definition of the gospel

I heard something interesting recently, not sure if it’s true.

A ‘study’ (which could have just been a google search) found that pain can increase your ability to concentrate. The idea here is to use an acute sudden jolt, as in a pin-prick. Chronic back pain doesn’t count.

Being a productivity junkie, I began thinking about that. But as soon as I started, I knew it wouldn’t work. Not for me.

When it comes to pain, I’m a bit less stoic and a bit more like the goldfish that dart away when you put your face next to the glass.

If you’ve been following along with the dailies for the past year, I’ve been working through the book of Matthew. Now, to the end (of Matthew), we get to the gruesome bits.

In 27:27-31, before they crucify him, they squeeze a strip of thorns into a circle and push them down onto his head, no doubt digging in deep. Then they hit him–in the head no less.

And he didn’t flinch. At least, not emotionally.

And then it occurs to me as I read this, that pain wasn’t even for him.

Worse…it was for me.

I can willpower my way through a lot of things. But I’m ninety-eight plus two percent sure, I wouldn’t have gone along with that. I just don’t have it in me.

And then, as I reflected…

…that’s the very definition of the gospel. At the point I can’t go any further, he does.

Why I Am (and am Not) a Christian: Two Books

Bertrand Russell was an exceptional thinker. Why I Am Not a Christian is a collection of essays about religion and morality. Some of his arguments are not too convincing. But others still give pause.

Years later, John Stott wrote a thoughtful (and I think, quite satisfying), rebuttal to Russell’s unbelief.

I believe we should not only read what we agree with, but what we staunchly disagree with, as well. That’s how we push and challenge our selves. And ultimately, that’s how we grow.

If you’re inclined to wonder about the logical and philosophical points of Christianity (or atheism), these are a solid jumping off point.

Why I Am Not a Christian by Bertrand Russell

Why I Am a Christian by John Stott

The crowds answered him, hungrily: “his blood be on us and on our children!”

It was, but not in the way they thought.

The chief priests were there coaching the crowd, not in holiness, as was their job, but in lust. In blood.

And then there was Barabbas who made his living starting trouble. What a strange turnabout, to be released on account of this.

Everyone seemed to feel like they had a handle on the situation. Jesus had become the point on which so many paths converged.

What no one seemed to understand was that Jesus was the only one that day in control of anything at all.

We often name the people in the story (the crowds and the leaders, for instance) as the enemies. But they weren’t. Really they were just more victims. They were tied up tight like slaves. At the mercy of the stalking, killing lion that always takes and never gives. Satan.

No one seemed to understand that all this–the fake trial, the impetuous crowd, even Barabbas–was happening so that Jesus could cut them all loose. So that, for the first time ever, they could actually live.

In 1992, the Los Angeles riots–the ones that produced Rodney King’s famous words, can’t we all just get a long, and that cost millions upon millions–seemed to push the city to its limits.

Here where I am, in New Orleans after Katrina, there were roving bands of normal people who, overnight, transformed into thieves and murderers. Militia guarding their property with rifles.

Strangest about all of this is how easy mobs are to form.

When Jesus entered Jerusalem during his last week: the city welcomed him as the king who would overthrow the Romans. They swarmed him. Ready to pronounce him kim and give him the throne, here, now.

A few days later at his mock trial: the same throngs demanded he be put to death. And instead, release the guerrilla insurrectionist, Barabbas.

But such swings–between normal to mob, and between happy-mob to angry-mob–are not really that uncommon.

In fact, we find that sort of behavior inside our own selves. For a lot of people, just driving the morning commute is point enough. You wake up, have your morning prayer time, kiss your kids on the way out, and then…someone cuts you off in traffic and the next thing you know, you’re trying to run them off the road. Oops.

It seems strange, when we think about it like this, how we can then turn and question why we need a savior. Why our sin is really punishable by something as serious as death.

But really, when we’re honest, and when we look for it, the proof is all over us.

What Judas didn’t do

Judas, once he saw what he did—that Jesus was actually arrested and actually condemned to die—changed his mind.

Something at that moment clicked.

Perhaps he thought they wouldn’t really get to Jesus. Or, maybe, just seeing it happen in real life changed how he felt.

Nevertheless, Judas became disgusted with himself. He tried to give the money back. He no longer wanted to be a part of what he’d done. He was in such anguish that he killed himself over it.

To some this is a convincing case. Maybe, after all that, Judas realized who Jesus really was.

But in the accounts what we never see is Judas arguing Jesus’ case. No matter how distraught he got, he never tried to change what he did.

He felt guilt…but not remorse.

There’s a wide gulf between guilt and remorse. We all feel guilty—that’s our moral compass. But remorse is the feeling that drives us to make a change. To try to fix it.

But those things don’t make us right before God.

Only picking up a new path does that. His path.