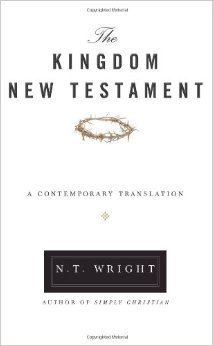 I bought a copy of Wright’s KNT about a year ago, and in that time it’s become my number one devotional Bible.  By devotional, I mean this is the Bible I pick up in the early mornings when I want to read though and prepare for my day.

The reason I always keep this version within reach is because of the flow and feel he’s put in his writing.  That’s not to say he’s done any re-writing—he hasn’t.  But just as the King James version retains a Shakespearian-poetic nature, the KNT has a casual conversational nature.  I’ll show you what I mean.  Here’s an excerpt from Matthew 14:

It is this overall writing feel that helps me sit down and read longer swathes at a time, rather than parsing out the details of a single verse.

When I’m studying, I’ll use a different Bible, and I’ll often focus more on verses and phrases and words.  But I think there’s something to be said for reading an entire book through in a single sitting.  It’s much easier to see the big picture this way, and this would most likely have been how the original readers would have read (or heard) it.

While Wright’s done a good job overall, he’s made a bit of a blunder out of the dialog.  He plants the dialog tag (the said Jesus or he yelled) square in the middle of the quote.  Three out of the four lines of dialog I quoted above catch him doing it.  This might be a refreshing change if done sparingly.  But as Wright’s made this his standard format, it feels more like someone karate chops one of my shins each time I come to an open-quote.  In other words, stop it.  Though, to his credit, he’s hardly a novelist.  I get that.  And, I suppose, for a Bible translator, that’s a good thing.  So I’m not grading him too harshly on the matter.  But where was his editor?  Why did no one stop him from doing this over and over and over and over?

The net result is he’s created a two-steps-forward, one-step-backward scenario.  As annoying as that is, I want you to know he’s still done a great job overall.

Do I recommend this version?  If you’re looking for a Bible (well, a New Testament, really) that’s clean and easy to read, then yes.  Actually, I recommend it above most.

As a quick matter of post-script, there’s one more thing.  The cover.  It’s hardback, like a normal hardback book.  And the paper is regular novel-paper, not the sheet-thin paper of most Bibles.  I think both features are an improvement–the hardback travels well, and paper is good for underlining.  If you’re anything like me, you read with a pencil in hand, and these two additions make that quite pleasant.

And yes, I do realize that I have just finished reviewing this book by judging its cover.  I say, why not?