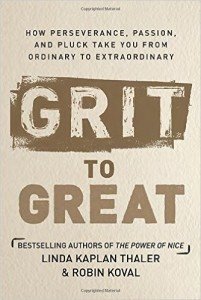 In Grit to Great, Linda Kaplan Thaler and Robin Koval discuss the components of success. They boil it all down to one key factor. It’s not brains or privilege or even passion.

It’s a great book. In the beginning they introduce the world of the last few generations where we’ve nurtured children to believe they are all winners. But statistically this has not panned out. Kids have not done any better or achieved any more because they’ve believed they’re winners. In fact, there is some evidence that our kids have done worse.

But something about this bothers me.

At least, leaving it here misses something.

Because, all kids are special, right?

Jesus didn’t die for the collective masses, he died for each one of us, individually. That’s why it doesn’t matter what religion your parents were. You have to make the choice for what you’ll do with your own life.

So which is it?

Where do we stand in all of this? Aren’t we all winners? That’s what grace would seem to indicate. But then, doesn’t that make us soft and, in the end, as the research shows, not winners?

I think the answer lies right in between the two.

In philosophical circles, there’s a criticism of christianity that goes like this: if God is so loving and so powerful, then why is there evil? In other words, God can do something about it, so why doesn’t he?

I think that question ignores the value of the challenge.

God allows us to go through these great challenge of life because he knows they’re building character in us.

But he doesn’t leave us stuck here. Instead, he still carries us through.

This has been a lesson for me as a parent. I want my kids to believe they’re winners. But I’m also afraid if I give them too much, I’ll make them too soft to handle life’s challenges. So what do I do?

The only thing I know to do is the same thing I’ve been learning myself. Move into the hard stuff, and lean on God the whole time. That last part is the asterisk.

Running away is not the answer. But neither is taking on the world guns a’ blazing.

Instead, it’s moving forward by following God’s lead through the mess.

This can feel very uncertain. And I think that’s why it’s so hard.

But I also think that’s why the reward is so good.

This post is a part of a new series on Conquering Fear.